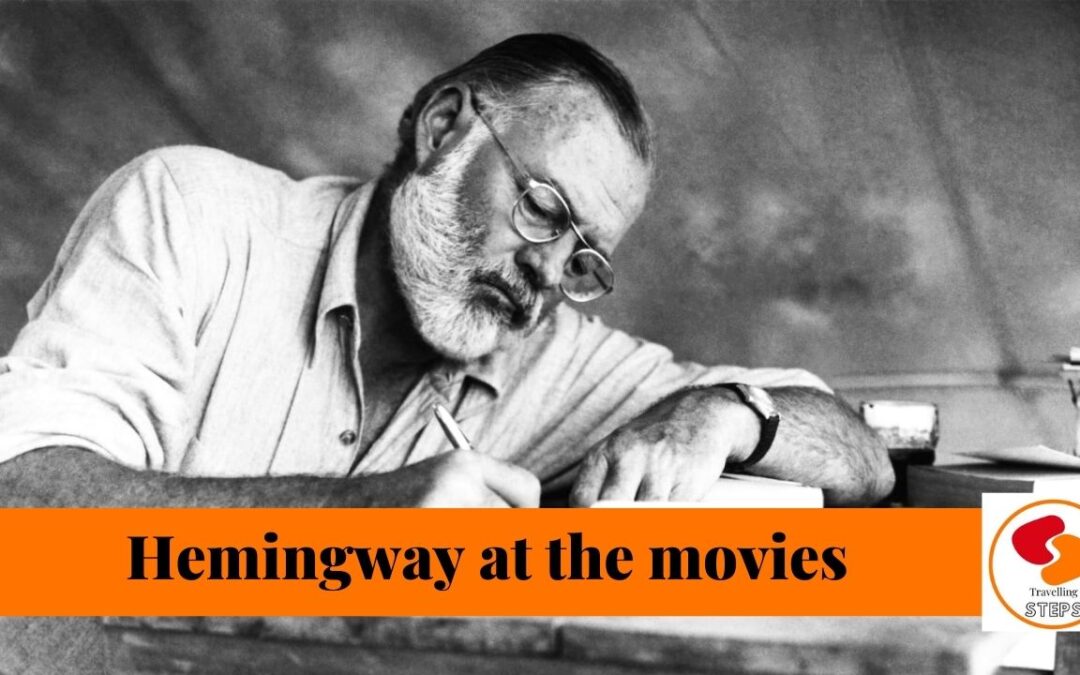 5 movies based on Hemingway´s books

One of America’s most prolific and celebrated writers to change the literary landscape is undeniably Ernest Hemingway. His roots in fictional writing were based on his strengths as a journalist—factually stated, to-the-point, and impactful words carefully crafted to impart the essence, depth, and breadth of a story arch without decorative flourishes.

While it’s always a challenge to capture a work of writing and adequately refashion it for the silver screen, here are five worthwhile adaptations of works by the incomparable Ernest Hemingway.

It was 1957, Hollywood’s golden era, when the shiniest stars at that time collided in this film. Tyrone Power, Errol Flynn, Mel Ferrer and the most beautiful woman in the history of movies, Ava Gardner, brought to life the passion of the Running of the Bulls.

The movie goes around the impossible relationship between Lady Bret (Ava Gardner) and Jake Barnes (Tyrone Power), or to be more precise, it talks about how each character runs away from the danger of being wounded. Using the Running of the Bulls as a metaphor for love and passion, we see how each one of them confronts that fear.

I must say that as a native of Pamplona, my opinion about the movie (or at least the part based in Pamplona) is not 100% neutral. I like the film, and I think it captures the vibe of the festivity in town pretty well, but when I see some images in what is supposed to be Pamplona, but it really is Mexico I have to close my eyes… My overall rating is “Two thumbs up.”

By the way, we are contributors with GUIDE COLLECTIVE and we have presented this Hemingway´s book in the BOOK CLUB.

for whom the bells tolls

Directed by Sam Woods in 1943, this magnificent movie tackles the Spanish Civil War (1936-1939). The main character, Robert Jordan (Gary Cooper), is an expert in demolitions and is working for the Republican side (remember that in Spain, the Republicans are the liberal party, fighting against Franco). Robert is appointed to demolish a strategic bridge that will change the course of the war. He is helped by some rebels. One of them is María (Ingrid Bergman). As you can imagine, here we have the love story, but you have to watch the movie if you want to know what happens at the end.

Franco’s regime was not too happy with Hemingway´s book, and as you can imagine when Paramount Pictures decided to make a movie of it, that was it. General Franco sent some writers to “help” with the script. The movie was not allowed to be shown in Spain until the death of the dictator in 1975.

A farewell to arms

There are two versions based on this book. Personally, I prefer the one from 1957 directed by Charles Vidor over the one by Frank Borzage from 1932.

It all starts when the hero of the movie, Frederick Henry, an ambulance driver played by Rock Hudson, is wounded in WWI and has to go to a hospital in Italy. There he meets Catherine Barkley, a Red Cross nurse played by Jennifer Jones. The couple falls in love, gets married, and Catherine eventualy gets pregnant, but the war is still going on. I will not spoil the movie, but get some tissues…

The important thing about this book/movie is that the beginning is based in Hemingway’s life. He was wounded in WWI when he was an ambulance driver and fell deeply in love with a Red Cross nurse. What happened in real life was not as romantic as the book. The father of the nurse did not accept the relationship, and made her dump him.

to have and have not

Now we are talking about real Hollywood chemistry. Lauren Bacall and Humphrey Bogart make the silver screen shiver in this 1944 adaptation directed by Howard Hawks.

This time we are taken to the Island of Martinique, where a cold-hearted Steve (Humphrey Bogart) rents a fishing boat to tourists. As the war continues in Europe, his business goes down and has to accept a job for the French Resistance.

The movie was a total success in the box office and also in the tabloids. At first, Warner Bros. tried to hide the relationship between a 44-year-old Bogart and the 19-year-old Bacall. In the 1940s, it was not considered as a proper relationship. People thought it wouldn’t last, but the couple got married and lasted twelve years together.

The old man and the sea

As this is Hemingway’s most important book (in fact, it won the Pulitzer Prize for Fiction and Literature in 1953), many versions have been done by Hollywood. My favorite is the 1958 interpretation.

Set in  Cuba, the story focuses on an old fisherman named Santiago (Spencer Tracy) in need of a good catch. When he finds the perfect fish, the fight is tremendous, and eventually, Santiago wins the fight. On his way back to the shore, the boat is attacked by sharks and by the time he reaches the beach, we only see the skeleton of the fish.

To me it is a metaphor that tells us about how much we lose when we are trying to reach one goal. Many times, we fight in the wrong battles, and don’t take a step back to see what will happen once we succeed in our task. It is an epic book and a magnificent movie.