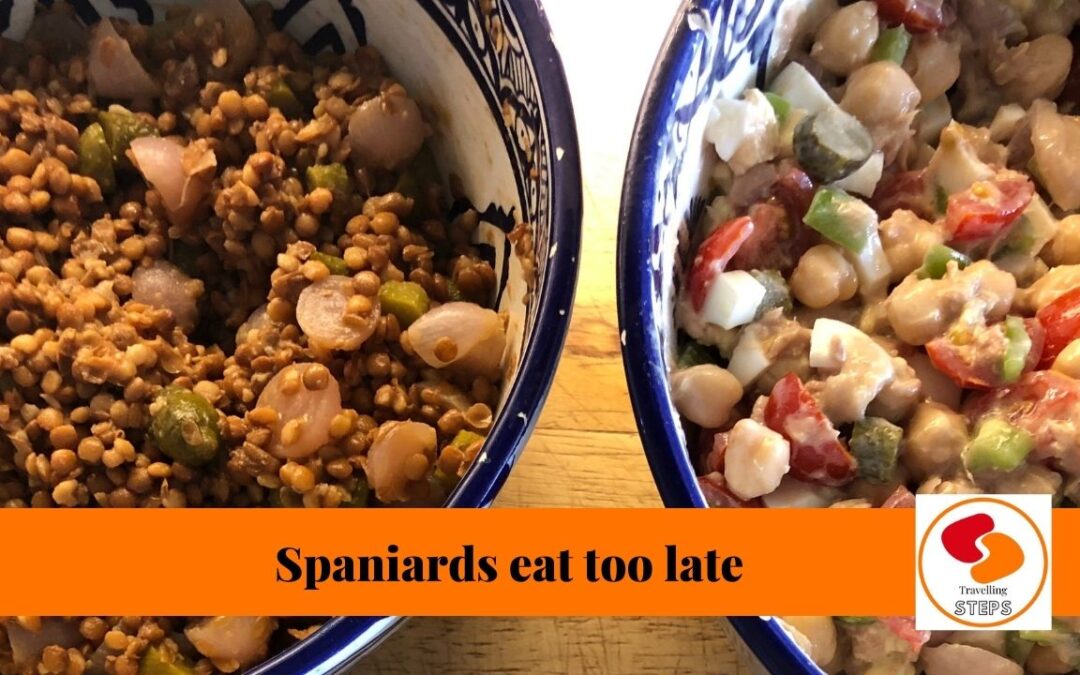 One of the things that shocks most of the tourists when visiting Spain is how late we eat.

Spain’s normal lunch time is at 2:00pm. Most of our restaurants will not be open before 1:30pm. At night we sit at the table no earlier than 9:00pm. I know that going to bed right after dinner is probably not the healthiest tradition that we have over here. As you can imagine, there has to be at least a couple of reasons for these strange eating hours.

To me the first thing that comes to mind has to do with our summer climate. Let’s face it, if you visit southern Spain in July or August the heat is going to be an issue, a very important issue. It is almost impossible to be on the streets when the thermometers say it is over 100 Fahrenheit degrees. So, we need to wait till the sun sets and temperatures start to go down to hit the streets and go for dinner.

The second reason has to do with our working hours. As Dolly Parton used to sing “Working 9 to 5, what a way to make a living” (by the way if you have just sung that sentence, you have an age LOL) 9 to 5 are normal working hours around the world, but here in Spain a normal work day starts at 9 and goes till 1:30pm. Then we have a three-hour break which, to me, doesn’t make any sense in today’s working world. After that break we return to work at 4:30pm and we finish at 8:00pm. The big problem is those hours in the middle of the day. In the old days it made sense, but today? I personally think it is wrong, but as we are following the traditional working hours, this is what we get.

There is yet a third reason for our eating hours, and that has to do with modern history. The issue is that Spain doesn’t belong to the time zone where we geographically belong. Today, Spain’s time zone is Central European time (CET), but geographically speaking we should be in the British time zone (GMT). To understand this, we need to go back to history. We need to go to the Spanish civil war (1936-1939) and the beginning of WWII (1940) . At this moment, Europe is ruled by 3 dictators, Hitler (Germany), Mussolini (Italy), and Franco (Spain).

When Hitler started WWII he needed allies for the war, and of course, he talked to the other two dictators. I guess they are the “3 amigos” ? Mussolini said yes right away, but Franco, could not join WWII.  Spain was coming out from our terrible Civil war. The country was totally destroyed. So, Franco said no to  Hitler about joining him in WWII, but to prove to the world that he approved Hitler’s ideas, he changed our time zone, from the British one to the Central European one, which is the one used in Germany.

So, when we say we start eating at 13:30, that is what the clock says, but if you look into the real time, which is the one given by the sun, we are starting at 12;30. So, I guess we don’t really eat that late after all.

But what about if you are a tourist and you are starving to death by noon?  Well, there is a great solution to this late eating.  It is called TAPAS. These bite size delicacies are served from 11:00 until 14:00 and at night from 18:00 until 22:00.  I guess that is why they are sooooo popular here in Spain.

Do you want to impress your friends with your Spanish cooking skills? Check our Tapas Cooking class.