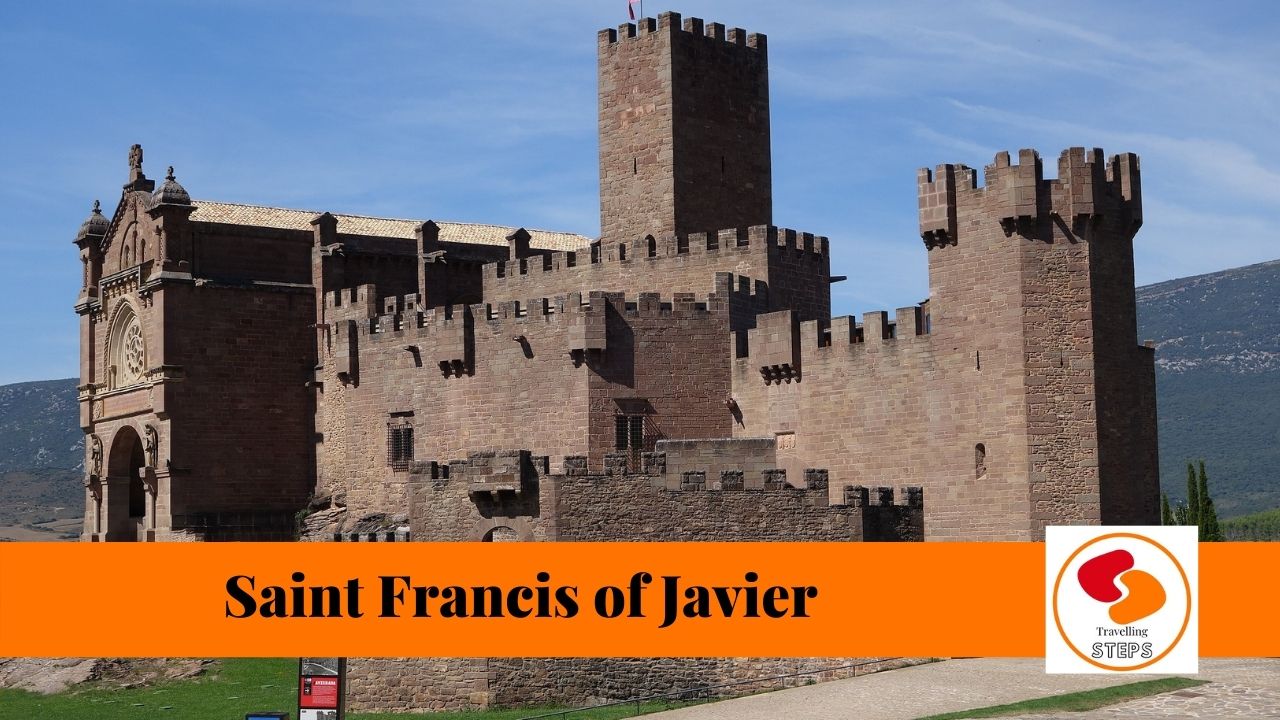 My mother and my grandmother were born in the village of Javier. Saint Francis´ birth place. Some time ago, I asked my mom to write about her love for Saint Francis Xavier. Here is what she handed me. I love it!!

I spent all the summers of my childhood in Javier, scampering through the moats and battlements of the castle just like my favorite Saint did. I love him with all my heart and I would like you to know him a little better.

who was Saint Francis Xavier? 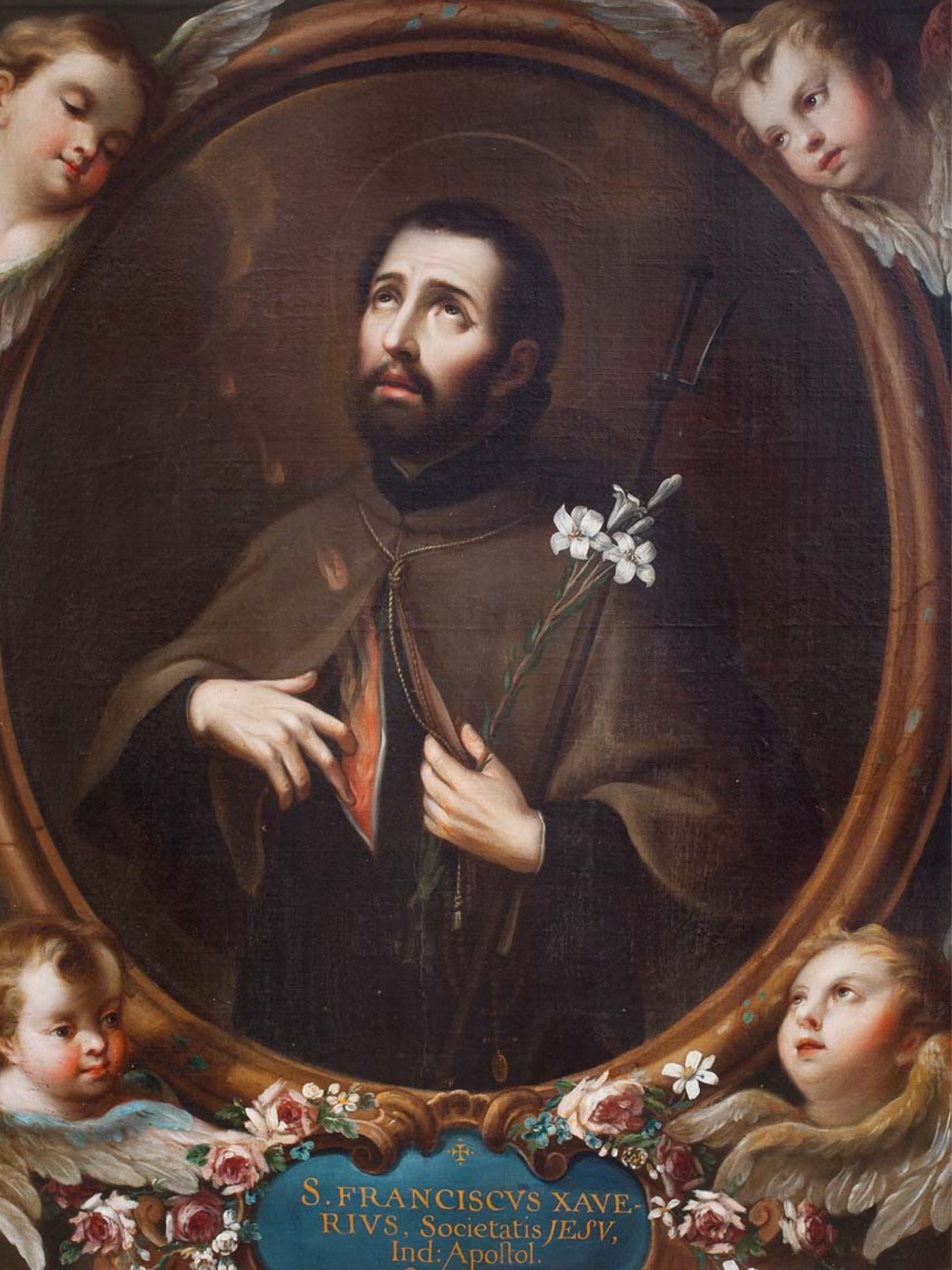 San Francisco Javier (as we call him in Spanish)  is the most handsome Saint in all the Celestial Court. Have you noticed?  It is not just me saying it (I am a declared fan), but because it is evident if you look at its iconography. He always appears with a flowery beard, curly black hair and bright eyes that convey spirituality and trust in God. In a lot of his bibliography it is commented about his physical beauty. It is also known that he was very charming, that he loved to dance, sing and play Basque pelote. His demeanor was elegant and, he had a great facility for languages. A very handsome man without a doubt, let’s not forget that before he was a saint, he was a man.

By the way his name was Francisco de Jaso Azpilicueta.  What happens is that he signed his letters, as was the fashion then, followed by the name of the town where he had been born, that is to say Francisco de Javier (Francis from Xavier) In fact, this is the name in how he was canonized in 1622.

What an incredible life!

When he was born in 1506, he was surely an awake and happy boy who played with his four older siblings, two boys and two girls. He could not enjoy his childhood for a long time because he had to live through terrible moments of war and riots in his beloved Navarra.

Francisco suffered the consequences of the historical moment when Isabel (from Castile) and Ferdinand (from Aragon) got married and became the “Catholic Kings” (1479).  Javier, his hometown, was not spared from battles and destruction.

His father, a very relevant man and great diplomat of the defeated kingdom of Navarre, died when Francisco was just nine years old. The new kingdom of Spain, ordered the demolition of all defensive structures in Navarra in 1516. Most of the family castle, decreed by Cardinal Cisneros, was destroyed.  With so much war and so many problems, a ten-year-old Francisco and his beloved mother were left alone at what was standing of the family castle. His two older brothers were imprisoned by the Catholic Kings. One of the sisters was forced to marry to a Count from the Madrid court.  The other one, became an abbess at a Clarise’s convent.

I imagine mother and son praying alone before the Christ of Javier. The Christ of the Smile, as we call him. This small private chapel was not destroyed by Cardinal Cisneros.  The tradition says, and I believe it, that it was the Christ at this particular chapel, who communicated to Francisco’s family what Francisco’s condition was during the time he was traveling all over the world proclaiming the word of Christ. The Christ appeared to be happy or sad depending on what was going on in Francis’ life. He even cried blood when The Saint died.

María de Azpilicueta (Francisco´s mother) worked hard to free her two oldest sons. Once they were back home all of them traced a perfect plan. They were going to give Francisco the best education money could buy, in order to prepare him to be a power figure in the new Spanish court. 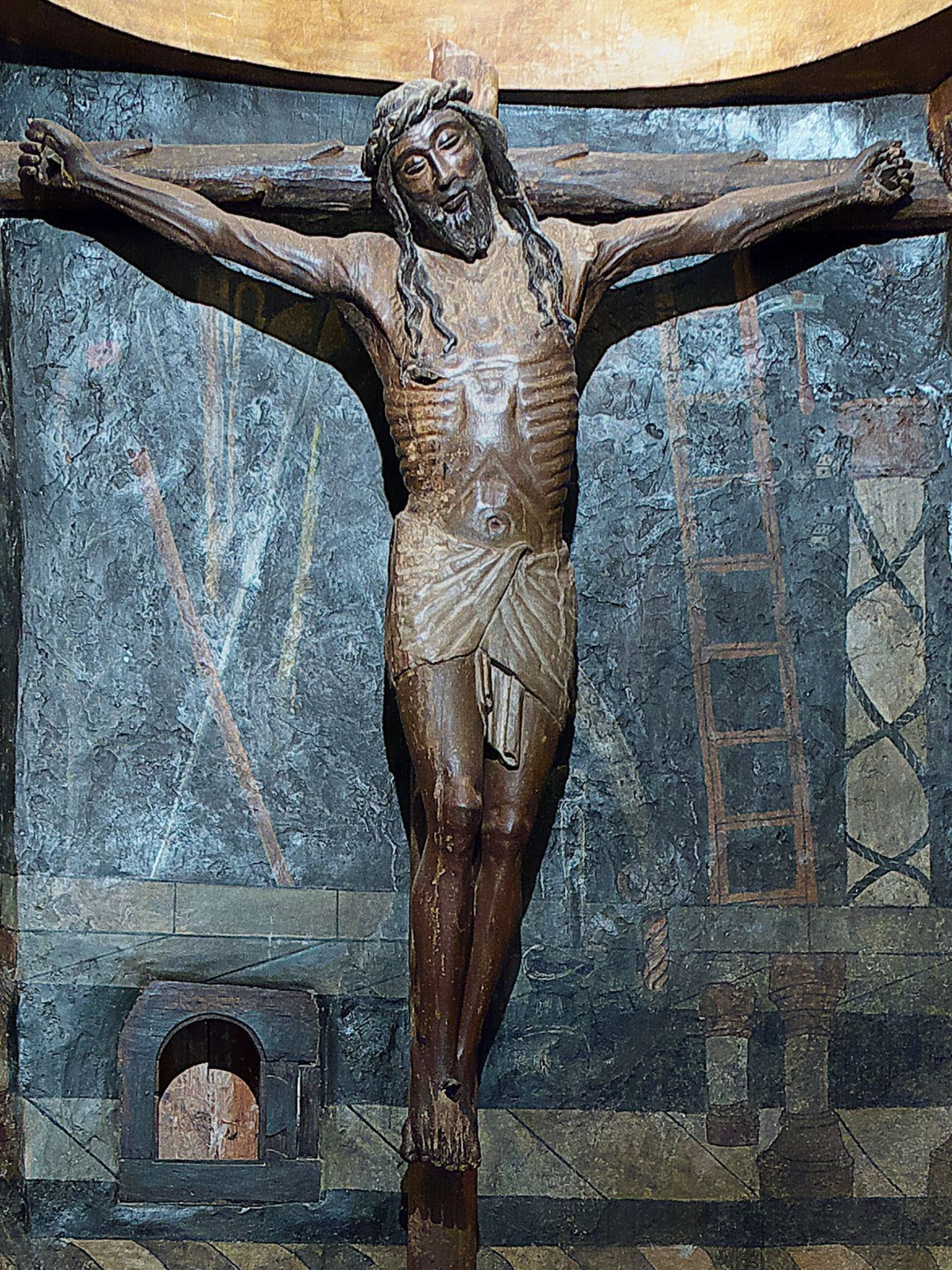 He studied in nearby cities of Sangüesa, Leyre, and Pamplona. At the age of 19, he was sent to Paris to complete his studies, thinking of returning as an influential and important gentleman. Just as his father was.

In Paris, being a young boy, handsome, easy going, sweet-talker, good sportsman, and very intelligent, he lived “happily”. Succeeding not only in studies but also in the social life of a young man of his age. He was very popular and women raffled him off. He had everything in abundance, but money. Imagine that the family economy had been very diminished by so much war and they could not afford to send him as much money as Francisco would have needed. He decided to teach some private classes in order to compensate his economy. This was how he met Iñigo de Loyola, who will later will be known as Saint Ignatius of Loyola, because of the great devotion he had to Saint Ignatius from Antioquia.

At first, Francis Xavier did not like this serious old man. An ex-military who limped ostensibly due to an injury he received in Pamplona. Ignatius was ​super centered (almost obsessed) with his education.  He was the one who continually reproached him for his dissolute and frantic life. Ignatius used to say: ” Francisco, what is the use of winning the whole world if you lose your soul?”

Ignatius had sensed the generous soul and great potential of this young man. He wanted to bring the best out Francisco. In the end, Ignatius convinced him to join in and help creating the Order of Jesus (The Jesuits). All the strength and vitality that Francisco showed for worldly life, he poured out when he joined Ignatius and began his spiritual life.  Francisco´s great journey to the East had begun.

For eleven years and until his death at the age of 46, he evangelized without failing through India, Ceylon, Malacca, Molucas and Japan, a country whose culture he felt in love with. His ultimate dream was to reach China. Unfortunately, he did not succeed on this task.  He died in Sancian just off the coast of that great country on December 3 – 1552.

He went through hardships of all kinds in those eleven years, but he was happy and positive. He was guided by God. From the stories he shares with all of us in his letters, one of the things that connects with me (in a very human way), is when he recounts how sick he would feel on those ships in which he traveled the oceans. I also get very dizzy and I know how bad that can be….

He is buried in Goa (India). Among the relics scattered around the world, his incorrupt arm stands out. It is preserved in the Church of Jesus in Rome. For us, the locals, it is almost a mandatory pilgrimage to visit this church at least once in our lifetime.

Saint Francis Xavier is a very popular Saint. Many Jesuit schools, universities, missions, and centers scattered throughout the entire world bear his name.He is the patron Saint of Navarra, of missions, of young people, of tourism, of sports, and as I said at the beginning, he is my favorite Saint.

I have a grandfather, two uncles, two cousins, a brother and a son named Francisco Javier. I believe that each one of them has been blessed by the Saint with some of his qualities.

If you ever come to Javier you will be able to walk through the places that Saint Francis Xavier  walked, see the same mountains that he saw and pray with the Christ of the Smiling face as he used to do. Don´t miss it, it is worth it.

As you can see my mother is deeply in love with the life and work of Saint Francis. I am too. In fact, now that I am writing this, I have just realized that when I have to tape a radio show or I have to talk in public I always ask Saint Francis to put words in my lips. I guess that the gift of talking is the one that the Saint blessed me with.

If you want to experience the places where Saint Francis spent his childhood, join us in our Saint Ignatius tour. We will visit the birth places of both Saints. Link here.

1516 – Order of Cardinal Cisneros to demolish the castle

1534 – He takes in Paris the first vows of chastity, poverty and obedience together with Ignatius.

41/49 – During these years he Christianized in Ceylon, Malacca, Moluccas

Join us in this virtual tour of Saint Francis Xavier birthplace. WE are visiting, the church where he was bitized, and the castlle of the Jaso Family.

We will be welcomed at the private chappel where the Saint and his family used to pray. The doors to this chapel are always closed to the public