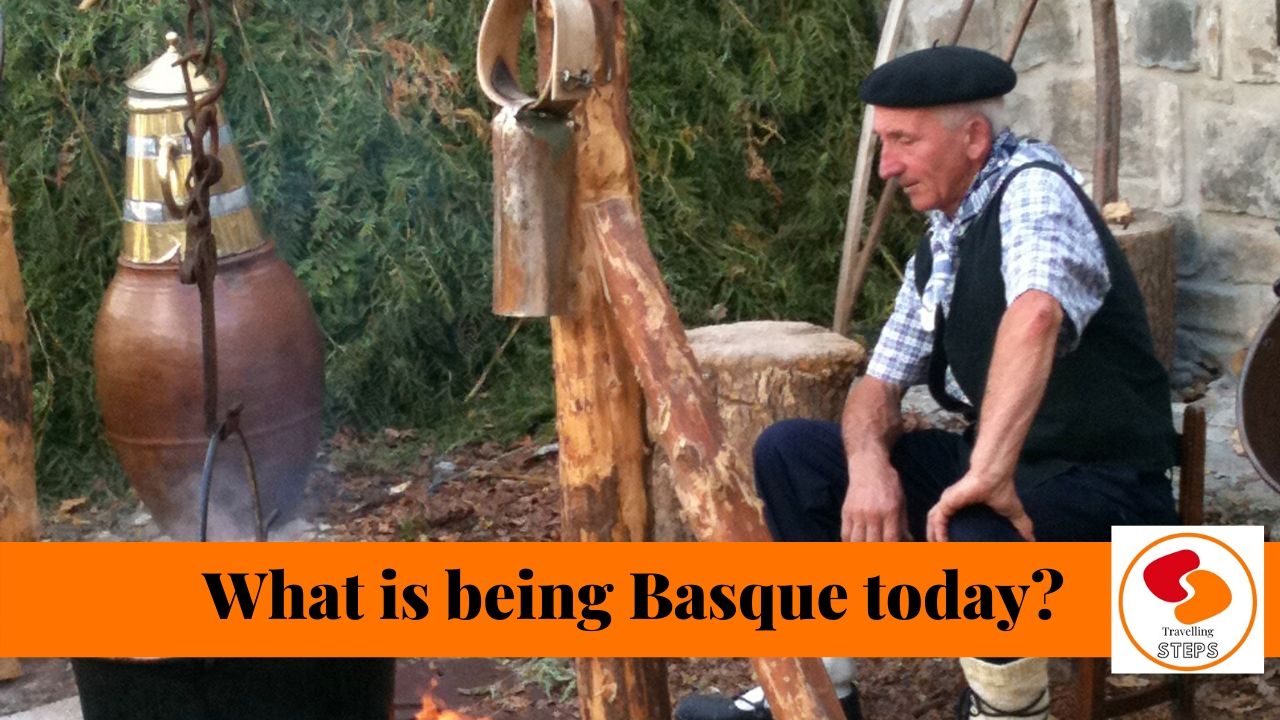 What is a Basque today?

At this point in my life and in the 21st century wondering what Basque is may seem strange, but I kind of have the need to go over my heritage. Specially if you understand that I was born in Navarra, the original birth land of the Basque culture.

Being Basque, is neither good nor bad (like it used to be).  I feel, I live, I love like anybody else in the world, although there are some circumstances that came to me due to the non-visible inheritance of genetics or ancestral tradition. Also, there are other circumstances, more visible, born from political decisions.

I found out about my Basqueness when, in my adolescence, fully coinciding with the Spanish Transition, I was sent to the study in the USA.  Spain changed in 1975, from a 40 year dictatorial government to a modern democratic country. It was the moment when ETA (Basque terrorist organization similar to IRA in Ireland) was setting the pace for the country.  I observed with surprise how people from other regions in Spain thought about what we, Navarrese, should be.  Spain put tags on us. Tags that were not 100% what I felt.  Some said we were all ETA supporters, and we should all burn in hell. Others said we had nothing to do with the Basques because Navarra had never had anything to do with the Basques.  At the beginning, and out of prudence, many like me passed by this issue in tiptoes. Later, I was more inclined to the side of having nothing to do with the Basques, I didn´t want to be related to the beliefs of a terrorist band. Now that I think about it, I regret the frivolity with which such an intimate subject was played in my own land.

Anyway, when I turned 18, my parents sent me to the USA to study my senior year in high-school. That was a big cultural shock to me. Can you imagine me, going from an only boys private Catholic School, to an American public high-school?  In Spain, I was not allowed to talk directly to the teachers without their permission, we had to wear a uniform and of course there were no girls.

The adaptation to all of that, really took me a while. Out of these chaotic moments (cultural and hormone chaos) my grades were not as good as expected, my math ones were especially terrible. I have to thank Mrs. T. my math teacher. Every single day for over a month, at lunch time, she would take me aside and explain everything over and over and over again. Beside thanking her for my mathematical skills, I have to thank her for one sentence that changed my life “young man, you are SO BASQUE” At the beginning, I didn´t get it, and I was even offended about that statement.  She told me that I was a very responsible, hardworking and stubborn Basque man. Mrs. T. said that I should visit the Basque house (Euskal Etxea) in town. She asked permission to my host family and drove me there.

The moment I set a foot in that magical place, I realized what she meant. I WAS BASQUE, I WAS HOME. That smoky smell, the music, the tables, the fronton to play pelote, the faces of those old men playing cards (mus to be exact). It didn´t just look like home, it was home. I still get goosebumps when I think about it.

By the way, I forgot to let you know that I studied in BAKERSFIELD, one of the cities in the USA with the largest and more active Basque communities. 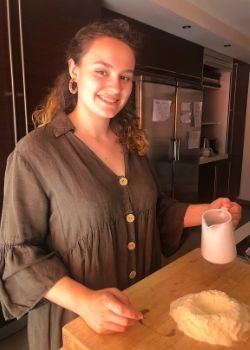 For the rest of that year, I would go there at least twice a month.  It was the time before internet. Do you remember that time? Some of the oldest shepherds would seat with me and ask me things about home. “Have you ever been to Elizondo?” “Do you know if restaurant Kasino in Lesaka is still working? I dated one of the owner’s daughters” “Tell us something about Guetaria” etc…

In Bakersfield, I discovered the power and honor of words. In our culture the oral transmission is more important than the written one. When a Basque tells you that they will do something, you really don´t need to sign a contract. It will be done. 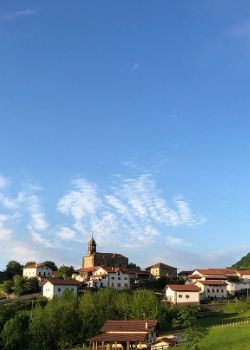 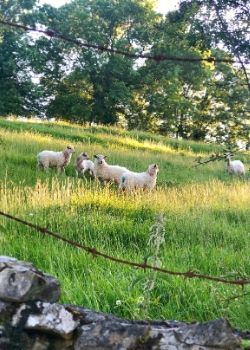 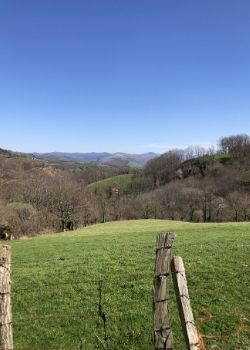 Linked for family reasons to Roncesvalles, descendant from a Basque-Frenchmen who smuggled over the Pyrenees. When he finally settled down in Burguete, his French influence gave softer tones to the family Basque accent. Today my relatives still mix it with a strange, yet perfectly understandable Castilian.

There is one Basque language, but every house carries the heritage of their ancestors, so it is slightly different to their neighbors.

I love the History of this little kingdom of Navarre, which started in the VIII century and became a great kingdom by the XI century. From a very young age I have been told about the stories of Roldan and Charlemagne, Catalina de Foix and Juan de Albret . The importance of the kingdom of Navarre in world history is enormous. Just think that it was us, the ones who stopped the Moors from crossing into Europe.  You also have to understand that Spain didn´t become Spain until Navarra, in the XVI century, joined the Kingdoms of Castile and the Kingdom of Aragon.  Our history is very complicated, and it should go in a different post… 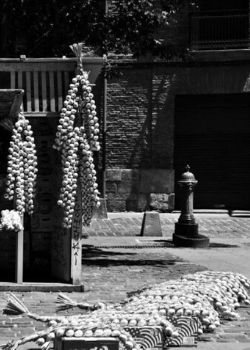 What about religion. Is it a Basque thing? I guess it is. But as any ancestral culture, the beliefs in nature and mythology are very strong. Over here we trust in Mother Nature (Amalur). We are protected by the guardians of the forest and the rivers (the Basajaun and the Lamías). Also, in order to protect our Etxea (homes) we normally have two symbols. One the Christian cross, but also the “eguzquilore” a dried flower that you will see in almost all the doorways.  We believe that God and nature, don´t need to work against each other, they work together.

The devotion to some Saints is immense. The Archangel Saint Michael is one of our favorites. By tradition, he is represented as the warrior who fights against evil. He is in charge to command God´s army.  Saint Michael presides over many important buildings all over the Basque Country. When his image arrives in April to Pamplona, he is welcomed with the Agur Jaunak intoned by the txistus (local flute). Respect is infinite.

Two of the most important Spanish Saints, were born in the Basque country. Saint Ignatius and Saint Francis Xavier. The first one was the founder of the Jesuits. A man who changed the way Catholicism was established in the XVI century. The other one, Saint Francisco Xavier, was Saint Ignatius’ right hand, and he is the main patron of missionaries.

Besides the history, the language, the religion, etc.… there were other (more folkloric) things I took for granted when I was a kid, and never realized that it is part of being Basque. Things like the homemade costume for the Olentzero (our Christmas celebration), the nickname of the house, a funeral stele, an ax-setting, the dances I learnt in school, that blue wool jacket with the red symbols I wore when I was a kid, the talo (Basque bread) made by my grandma. And so many others. What happened to me has happened to many people of my generation. I mean learning that we are culturally Basque in an older age. In a context in which the world has become a global village preserving our legacy is a must.  I remember now the wise words of my grandfather “Don´t go saying what you are, just BE who you are”

Some famous “responsible, hardworking and stubborn” Basques in modern history:

– Ainhoa Arteta (Lead Soprano at the Metropolitan in NYC)

– Juan Mari Arzak (chef and father of the modern cuisine)

– Cristobal Balenciaga (the best fashion designer of all times)

– Jon Kortajarena (Considered as the best male model in the world)

If you want to learn about this and much more about the Basque culture, join us in one of our Basque heritage tours.  www.travelingsteps.es

Talo, the Basque bread for foodies
At Traveling Steps, we are traveling green

PAMPLONA´S CITYHALL IS A MUST IN TOWN