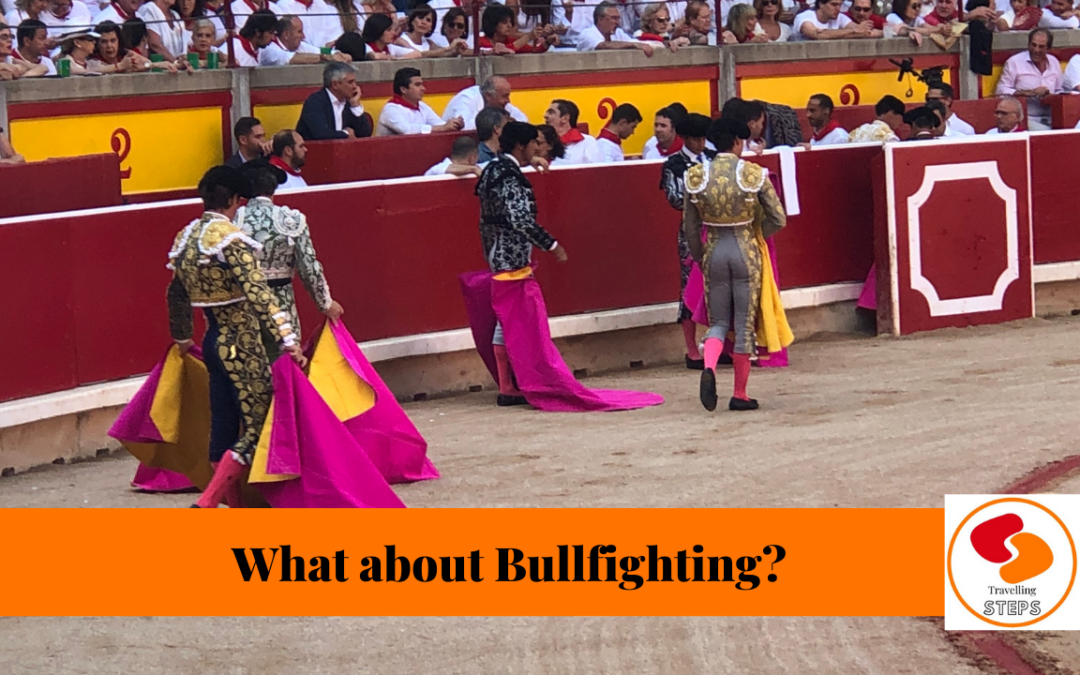 I was born in Spain in the 1970’s , General Franco was still the dictator of Spain. His administration controlled almost everything, specially they controlled the TV. So growing up, there were just two things to watch. It was either soccer or bullfights. Today I will write about the second one.

I will never deny that at bullfights an animal dies and I know it is hard to understand when you have not been born in this culture. But there is much more about it than just blood and sand. Please read all the way till the end of this article I will try to exoplain the tradition behind it.  A tradition, we might need to change.

We need to go back to Roman times. Spain (Iberia or Hispania in those times), like the rest of Europe was part of the Roman Empire. We all know that in arenas throughout the empire, Romans pitted lions and tigers against Christians. Here in Spain, the Christians were forced to fight bulls. This is how bullfighting started.  If you have travelled around Europe, you have probably realized that in the Mediterranean culture, the bull is one of the most respected animals. In ancient mythology the bull is a Holy animal, for example, we have the representation of the minotaur (half bull, half human), and we also have Zeus transforming himself into a bull to kidnap Europe. So, the bull has always been considered a superior creature when compared to humans.

So as bullfighting is a Roman thing, somebody has to die. The creature who will die is the bull. But he is given a chance to survive, and that opportunity is given by the “matador”. People always believe that the Matador is the bad guy in the arena, but that is far from the truth. His job is not to kill the animal, it is to save the animal’s life. Their job is to risk their lives to save the bull. Are you confused yet? 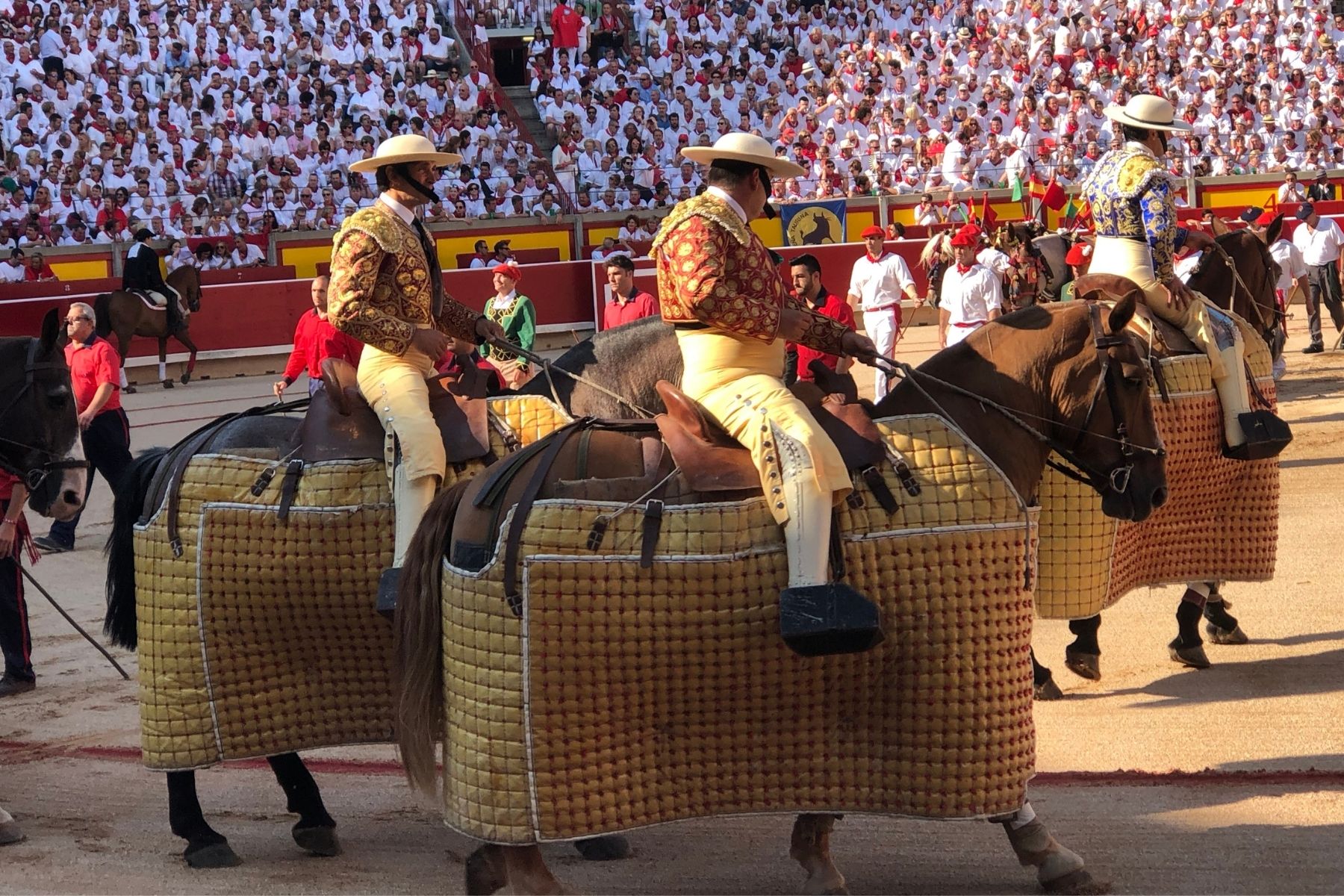 The “corrida” (bullfight) has 6 bulls and 3 matadors. Each bullfighter will fight 2 bulls. This is not a prolonged fight, the timing is very strict. From the moment the bull enters the arena, he has to be out of there (dead or alive) within 25 minutes. The timing is controlled by the president of the corrida. You will find him/her wearing a dark suit, seated in a special place across the arena from where the bulls come out.  Just as a Roman Emperor, the president is the one who decides the fate of the animal, NEVER the bullfighter.

When the fight starts, the bullfighter, on his own, will welcome the bull with a big cape (capote) This one is fuchsia pink on one side and bright yellow on the other. This will be the beginning of a friendship. The bullfighter will learn all the weaknesses of the bull. Not to show them, but to hide them. His job is to make the animal appear as what he is considered to be a God: powerful, strong, fearless….

Next, the bullfighter will be told to go, and the Picador will come into the arena. This one is a man on top of a horse. The horse is protected with a vest made of bulletproof material. This will be the first time in his life that the bull will feel pain. He will be stabbed twice, and depending on how he reacts to the pain, can work in the bull’s favor.

Then the Picador exits the arena and the banderillas enter. These are 3 sets of 2 long sticks that are placed gracefully at the back of the bull. And once again, depending on the reaction of the bull, it will count as apoint on his side. The banderillas job is very difficult, because you really need to go very close to the bull, and the bull learns quickly , the 3rd set is very risky.

Then the Banderillas go and the Matador returns on his own to the ring. This time he will be wearing a red cape (muleta). This is the moment of truth. The matador will try with his dance to make the bull look like the perfect creature  it is. It is to me the most beautiful moment of the corrida. They become one soul. A good matador will be the bulls shadow, will be his breath, they unite.. When this happens, the president will give his “thumbs up”, and the bull will be taken alive from the ring. The rest of  that bull’s life will be great. Let’s face it, we want to have many, many baby bulls like him…. So, he will spend the remainder of his life eating the best grass and meeting the most beautiful cows….

On the other hand, if the bull and the matador don’t create this magic. If perfection is not created, the president will put his thumb down, and the expected fate of the bull will take place. The president will give the matador a moment with the bull, so he can say goodbye to his friend. This part is a very intimate and emotional moment, it has a lot of that 18th century romanticism. The bullfighter will have a chance to apologize to the bull for pretending to help a God, he will comfort the bull with his dance as he says goodbye. Then the bullfighter will lead the bull to death. A very proud and fast death.

If you are wondering what we do with the meat, it is simple. We eat it. In fact here in Pamplona the tradition is that 3 of the 6 bulls go to charity and the other three go to local butchers. The traditional recipe this meat is very similar to Julia Child’s beef bourguignon, it is just “bull bourguignon”

I know it is difficult to understand, especially in today’s society where we deny death, but in the arena, we honor life. We do not celebrate the death of the animal, we celebrate his beauty, his strength, his respect for life.

Thanks for reading this post all the way through, and at least for giving me a chance to try to explain our traditions. As a good friend of mine says “bullfighting is like opera. When you see the first one, you either love it or hate it. The only difference is that with time you can learn how to love opera, but you will never learn to love bullfighting”

The 5 perfect classical music albums
My life as a Tour guide – Vol. 3