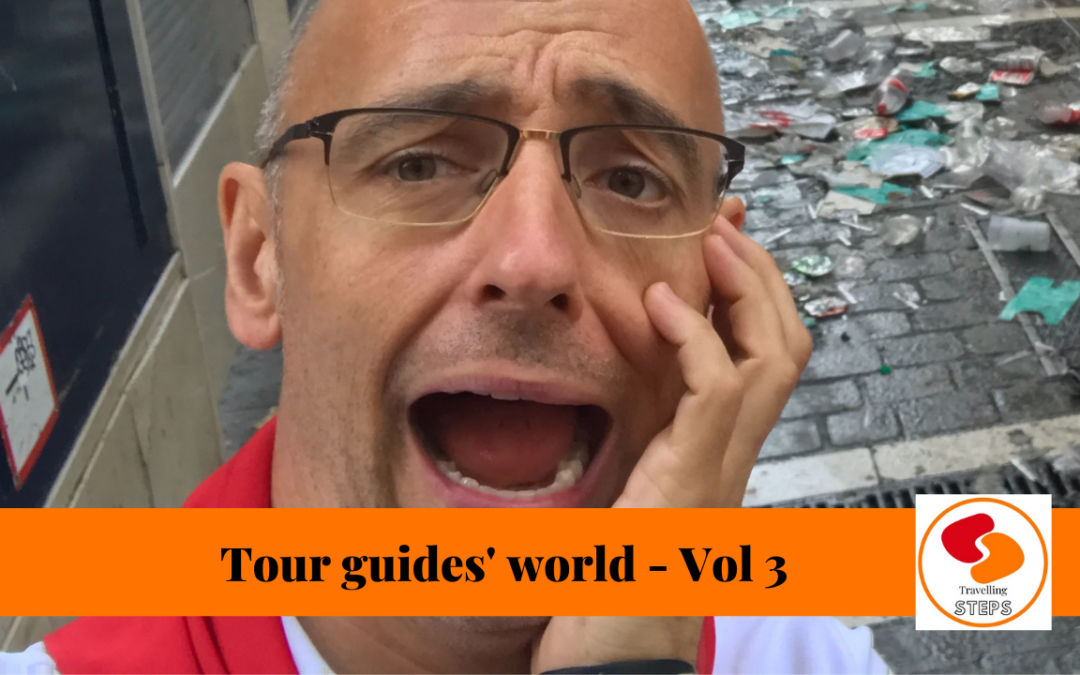 As you can imagine, when tour guides get together we “never” talk about our clients… Well maybe a little bit once in a while. Here are some anecdotes of my life as a tour guide! I have changed the names and nationalities of my guests.

This time I am going to share with you a story that you might think it is not real, but it really happened to me. Needless to say that this has been the weirdst city tour I have done…

The Knights of the Light

It was a hot summer Sunday when I welcomed a group of 21 people coming from Mexico City. The agency that hired my services warned me about the let’s say “special group” I was about to greet.

The bus arrived when the bells at Saint Nicolas Church rang at eight o’clock. My guests came down from the bus a little sleepy, but with a big smile on their faces. One of them said that they were very happy to be in such a spiritual town. The driver gave me a strange look and said “all for you my friend, all for you…”

My thoughts were abruptly interrupted when a lady from the group started screaming like crazy. I ran towards her to see what was going on… When I saw her, she was shaking against a wall with her eyes wide open and shouting words I would rather not repeat…

Everyone from the group had their heads down and were not helping her. I tried to reach  her but Mr. Miguel stopped me and said, “do not touch her or the Black Light will possess you as well. We need to do an emergency exorcism”

At this point my brain exploded;

What the f..k  is this guy talking about?

We need to do a what?

Where should I go? What should I do? Frankly my dear I don’t give a damn…

With an incredible relaxed voice, I asked Miguel what he needed to carry out the emergency exorcism. As you can imagine the answer was as bizarre as the situation I was living “we need to find the tree of the pure light”

I pointed towards one random tree in the square and Mr. Miguel nodded. He ordered the rest of the followers of the light to put on their white gloves (don´t we all carry white gloves?) and bring her close to the “tree of the pure light”

As they were putting on their gloves, the group started singing a strange song that I could not understand. At the beginning it was soft, but as they were getting closer to the tree, the soft rustle became a thunderous chant. As you can imagine, people started to gossip from their windows, even the police stopped to see what was going on.  In fact, picture me trying to explain to a couple of police officers that all of that weird hustle on a warm Sunday morning, was a basic emergency exorcism….

The exorcism came to its climax when Mr. Miguel took a huge dagger out of his backpack and started dancing around the possessed lady. Mr. Miguel started ordering the black light to leave the lady alone. I guess the black light was deaf, because he needed to scream it louder and louder each time.

At this point the police officers started to get nervous. Here in Spain it is illegal to show in public a knife with the blade larger than four inches. Trust me when I say that that was at least an 8 inch dagger.

I was about to scream too when Mr. Miguel shouted from the deepest part of his lungs “SILENCE”. Suddenly everybody froze, and Mr. Miguel stuck the dagger in the ground. The possessed lady opened her eyes, smiled and said “let’s continue with the city tour”.

Excuse me again! But we are not going to do the city tour now, I need a chamomile, or maybe better a whisky. I told the group that we all needed a little break and I went to the nearest coffee with the two police officers. The three of us ordered a chamomile. Once I made myself up, and found strength we continued with the tour. You cannot imagine how happy I was when the group left the city.

As you can figure out, this has been my most surreal tour I have ever done in my life. I almost had a heart attack!