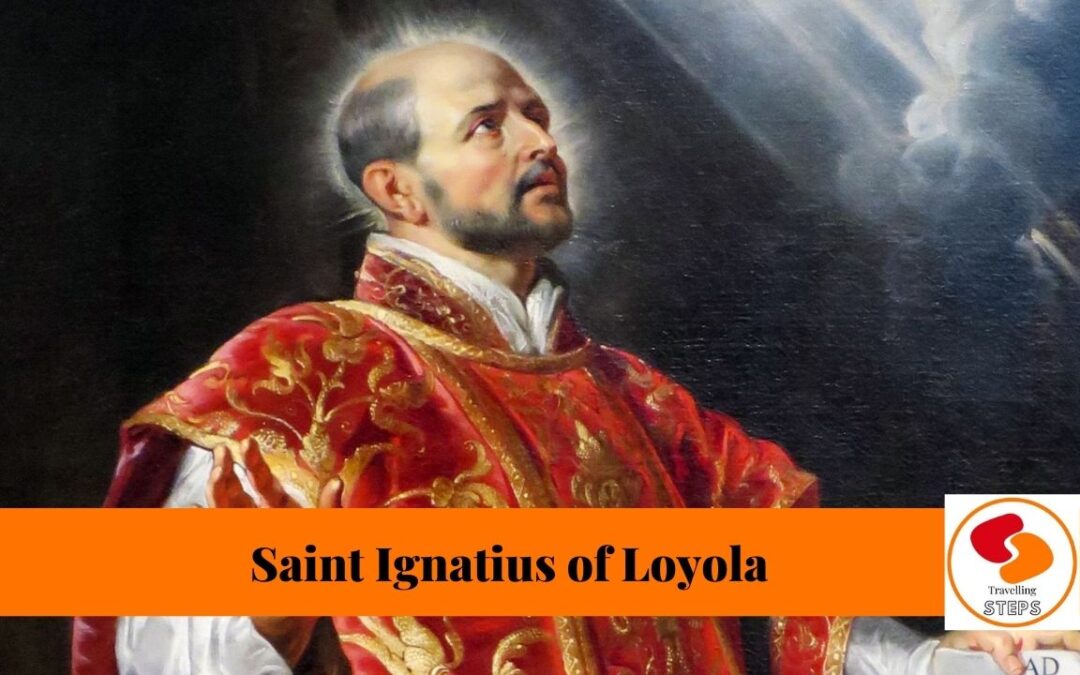 Saint Ignatius, the man who changed the world

Saint Ignatius is one of those historic characters who resonate with me, in a very personal way.  I don’t think he touches me simply because he is Basque like me, and I understand his heritage. He is not just Basque, he is a universal figure. Maybe it is because he lived in a moment of big changes in history. In a world full of fear, doubts and darkness he found his place in that new world, and was able to reach the souls of millions.

Now that I come to think of it, that could be it! I feel that right now, we are inventing a new world. There are new human values. The way we reach people is different. We communicate differently.  The world as we know it is changing. I hope the change is to a more human, loving, respectful and inclusive world.  I find myself lost in this chaos, I need to find my place in this new world. 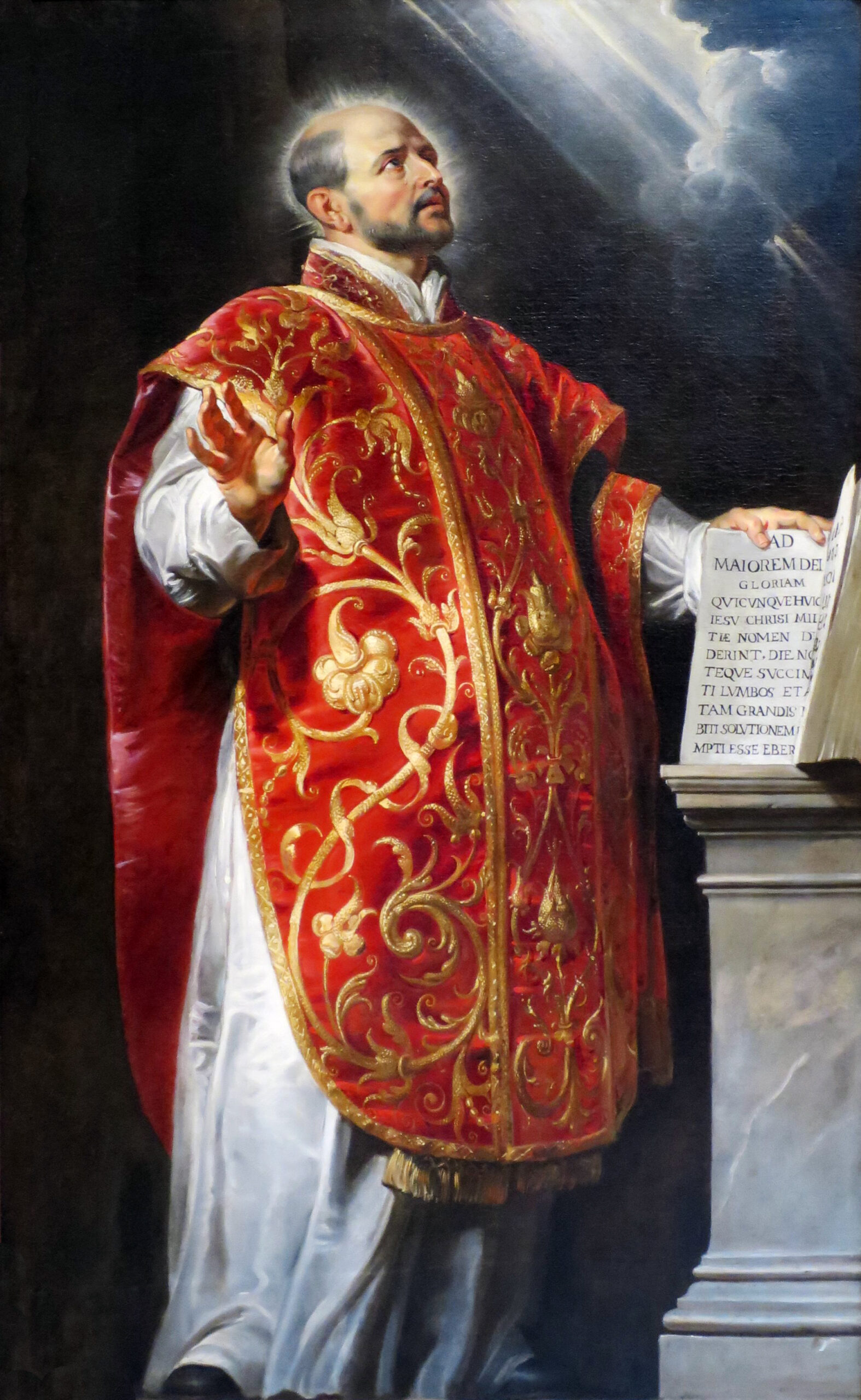 It is kind of basic to start with his name, but many mistakes are made about it. Some people call him Iñigo and others Ignatius. Iñigo, was his birth name and this is a very common Basque name. In his early letters, he always signed them as Iñigo. Later in life, he took the name of Ignatius. It sounds like a Latin version of Iñigo, but this was not the reason.

He decided on this name because he loved the life and work of Saint Ignatius of Antioch, who was born in Syria right after Christ’s death. He is considered to be the father of the church; his letters set the basis of Christian theology. They also give us a clear perspective of the Christian communities of the second century. He died in Rome as a martyr.

You will also find writings referring to him as Iñigo López de Loyola, and others as Iñigo López de Recalde, but the name by which he is known worldwide, and since the Company of Jesus was consecrated and founded, is Ignatius of Loyola.

Iñigo was born on October 23th, 1491, in Loyola, a small defensive village in the Basque region in northern Spain.  Those were “strange” times in the history of the world. America was about to be discovered, and the perception of the world would be changed forever. Nicolas Copernicus, discovered that we are not the center of the universe. We go around the sun, not the other way around.  In Spain, it was even more complicated, the Catholic Monarchs got married, unified (in not very peaceful terms) Spain and became the rulers of the most important Empire in the world at that time.

Iñigo was the youngest of 13 siblings. His father, Beltrán Ibáñez de Oñaz, was a nobleman who worked for the new Spanish crown. When his mother, María Sáenz de Licona, died, Ignatius was just 16 years old. His father couldn’t educate him properly and asked the help of María de Velasco, wife of the senior accountant of the Kingdom of Castile, a friend of the family.  He remained under the tutelage of the couple for 11 years.

He was able to travel through the kingdom and learn about court manners. Apart from the exercise of arms that he had always liked, he loved to read and write, and took advantage of the wonderful libraries of his noble benefactors. One of the things that draws my attention powerfully when reading his letters, is the perfect spelling and beautiful handwriting. Incidentally, he wrote over 6,800 letters!

Iñigo was a proud young man who was successful in worldly settings. He devoted himself fully to his military career, becoming captain of the Castilian armies, where he showed signs of bravery, prudence and good handling of difficult situations, which confirmed him as a great strategist.

In 1512 the Kingdom of Navarra was annexed to the Kingdom of Castile. As you can imagine, the Navarrese royalty was not very happy with this new situation and confronted Castile many times. In the spring of 1521, King Ferdinand (the Catholic King) had had enough with the Navarrese and sent a much larger army to settle in Pamplona (the capital of Navarra) commanded by Iñigo.

They resided in the fortified castle located in the southern part of town. From here, Iñigo could control the main entrance to the city and the water supplies.

The Navarrese troops, supported by the French crown, gathered at the northern bank of the river. Small conflicts occurred daily. But it is the morning of May 21st 1521, when the biggest fight took place. Both artilleries showed no mercy. Cannon balls destroyed 60% of the city. By the end of the day, casualties were counted by the thousands. Iñigo was among the injured. A cannon ball had torn his legs apart.

Iñigo was carried on an improvised carriage to his home in Loyola.  It took 10 agonizing days to reach home. Ten days to cover sixty miles of dirt, blood and pain. Fearing for his life, he received extreme unction (annointing).

Although his recovery was very slow and painful, miraculously he survived.  There is an anecdote of those days that says that as the bones were badly welded, Iñigo asked the family surgeon to break them again and reposition them. He could not bear the ugliness of his deformation.

In Loyola there was no large library on chivalrous or worldly matters, which is what would have entertained him given his fondness for “easy” reading. On the other hand, he found an abundance of religious books, such as the Bible, lives of Saints and Martyrs.  As he had so much time and it was a subject he had never thought about, he decided to approach them calmly and dedicate time and reflection.

He discovered a dimension of the world that he had never noticed. He saw how his previous motivations were vain, mean, and absurd when he placed them in front of the greatness of God. Those earthly pleasures and honors, even if intense, were momentary, while spiritual ones endured. He concluded that God was giving him a new opportunity. He rethought his life and became Ignatius.

He persevered in his religious readings. One night, Holy Mary appeared to him saying, “Leave everything and follow me.” He had no doubt, he was on the right path. He went from considering himself a rich man at the peak of success and fortune to wanting to be the poorest of mortals.

He decided to make a pilgrimage to Jerusalem to do penance and make up for so many sins from his previous life.  It was 1522 when, with great pain from his wounds, and still dressed as a soldier, he left home ready for his new life.

On March 25th he arrived at the Benedictine Monastery of Montserrat.  I cannot imagine what happened to him, but there, surrounded by those magnificent mountains and under the warm smile of La Moreneta (the Black Madonna of Montserrat), he took off his military clothing and left barefoot.

This is how he arrived at Manresa, where he lived as a hermit for 10 months in a humble cave. Ignatius searched inside himself with meditation and fasting, only helped by some women who would feed him. They considered him as a holy man. Maybe it was the help of those women that changed Ignatius’ ideas of a solitary life, to one committed to working for others. From this experience also arose the Spiritual Exercises that are the basis of Ignatian spirituality.

Ignatius continued his pilgrimage to Jerusalem going through Venice, Rome and Cyprus.  Once he considered that his pilgrimage had concluded, he returned to Spain to continue with his academic studies.

As a man-at-arms who had a great military career, he recognized that he lacked humanistic training. He learned Latin in order to access some of the best universities in Spain, such as Alcalá de Henares and Salamanca. In his free time, Ignatius talked to his fellow students about the Spiritual Exercises, about living in poverty and preaching with meekness.  Some of this preaching was not well received by his superiors and  even caused him problems with the “holy” Inquisition. He was imprisoned for 45 days, although in the end, he was declared innocent.

In 1528, he decided to travel to Paris to study at the best university of that time, La Sorbonne.  Besides deepening his theology studies, he met six amazing men:  Francisco Xavier, Pedro Fabro, Alfonso Salmerón, Diego Laínez, Nicolás de Bobadilla and Simao Rodrigues.

On August 15th, 1534 these seven men took the vows in Montmartre and promised to “serve our Lord leaving behind all material things“. Pope Paul III allowed them to become priests and they did so in Venice. Ignatius celebrated his first mass on Christmas night in 1538.  All of them dedicated themselves to preaching and charitable work with the poorest, living on charity and working unceasingly.

The foundation of the Society of Jesus, currently known as the Jesuits, was approved on March 14th, 1543. Ignatius was elected Superior General of the religious order and remained so until his death.

Most of his apostolate lived in Rome. Ignatius died in his cell at the Jesuits’ mother house in Rome on July 31st, 1556 as a result of a long gallbladder disease.

I know it makes sense to finish this writing by talking about the legacy of Saint Ignatius, but I am afraid that will have to be in another post. There is too much to talk about. Just one small fact: there are over 3000 Jesuit Schools in the world. Imagine how many kids are educated with his amazing philosophy….

And of course, many Popes studied at Jesuit schools, not least  Pope Francis.

Books to understand Spain
Once you run with the bulls!