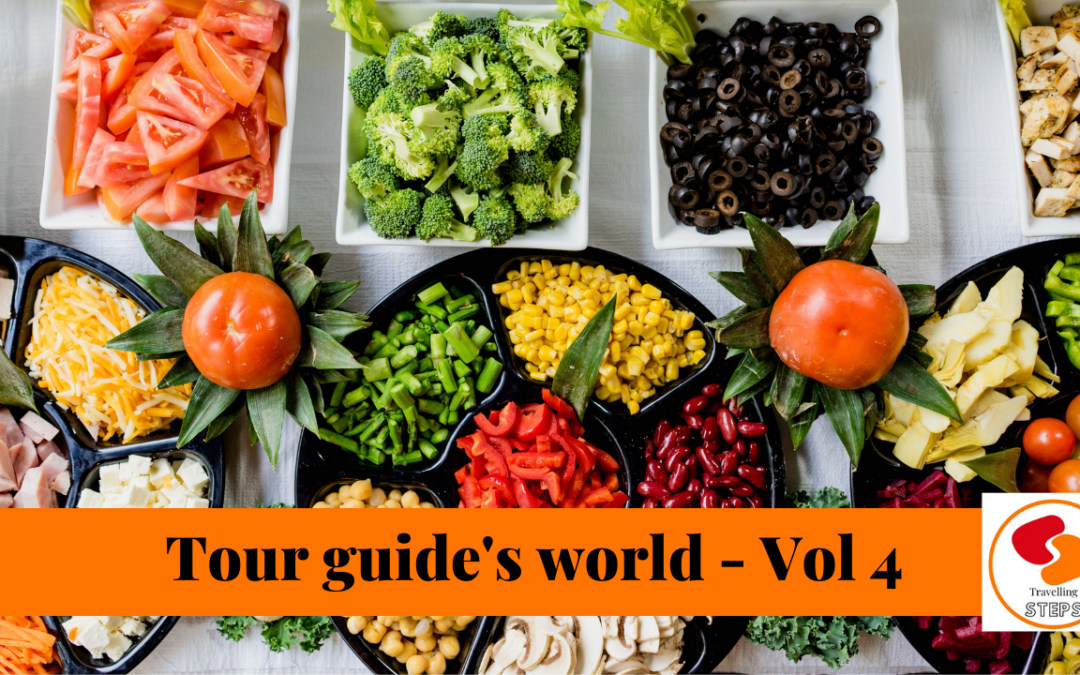 In this series of my adventures and misadventures as a tour guide I try to share some of the “fun” moments I have encountered in my 20 years as a guide. As I have done in “My life as a tour guide” volumes 1, 2 and 3, I will change the names of my guests in order to hide their identity.

This time I want to write about food issues while on tour. Or as I call them instead of Food Lovers, these people are Food Haters!

Let me confess right from the start of this article, that I myself would be a total nightmare for any guide. I suffer from many food-related allergies. I cannot eat beans, some fishes, some nuts and especially honey. Let me tell you, my allergies are quite severe. If I eat any of these products I would go into an anaphylactic shock in less than 5 minutes.

When you are a person with so many food restrictions and you are also a food lover, you need to learn how to eat safely but at the same time make the effort not to miss the gastronomy of the cultures you are visiting. To me food is as important as any monument or museum in order to understand a country.

A few years ago, I guided a family from the USA, to be more precise from the Upper East side in Manhattan…. Let’s call the matriarch Mrs. K. She was inviting 7 of her grandkids to a European vacation. Mrs. K made her fortune in agriculture and because of that she wanted to visit some farms.

As it was early spring and the first fresh products were ready to be collected, I organized a tour to a small organic farm where after visiting the garden, the mother of the family cooks you a meal with the veggies you have just collected. It was really an amazing experience, from the ground directly to the table.

One of Mrs. K’s granddaughters was not the happiest teenager in the world as we were visiting the farm. It was too dusty, the farmer was touching the veggies without gloves, there was no charger for her iPhone…. She made it very clear that she was not enjoying the experience.

Once we finished the visit to the farm, we went to the restaurant. As we were the only guests for the day, they offered us to go in the kitchen and learn how to clean and prepare some of the dishes. Mrs. K was delighted and six of the seven grandkids went crazy with this opportunity. The stuck-up granddaughter refused to go in, because according to her, a kitchen is the place for servants and not for someone like her.

I have to say that that meal was one of the most memorable ones I have ever eaten in my life. Everything was perfect except for the teenage monster… There was not one dish she liked; peas should not be served with ham, the beetroot salad was too salty, green beans undercooked, the stuffed zucchini had too much cheese. I thought there could be no more complaining around a table, then I realized I was wrong. When the kid saw an amazing warm onion soup being served, she demanded that she wanted her onion soup without onions, so she ordered the waiter to take her plate back to the kitchen.

That was it, Mrs. K had enough. She stood up, went to the kitchen and one minute later she returned with the same serving bowl and very calmly, with a smile on her face said to her granddaughter “It is OK sweetheart, you don’t want onions in your onion soup? Here, I have just prepared this soup for you.” The tension was electrifying, the other six grandkids held their breath.

When Mrs. K served her granddaughter the soup, the rest of the kids could not stop laughing. Grandma had cooked specially for her one full plate of plain hot water and said “now you can eat your onion soup without onions”

As a tour guide I am used to welcoming people from every corner in the world. This has made me appreciate that Japanese guests love to eat raw garlic, Americans need fresh pepper at any meal or people from India love everything extra spacy. We also welcome people with different religions. Our job is to try to accommodate their special food requirements. As you might imagine it is not always possible to eat Kosher or Halal when you are in a small village in the middle of the Pyrenees, but we do our best.

It was the summer of 2016 when I welcomed a young couple from Mexico. I was going to be with them one week showing them the Basque Country. They were super nice, active, funny, willing to learn, just the perfect guests.

Everything was going great that first morning. It was sunny but not too hot. The city tour ran smoothly, we even had the chance to listen to a great street band. Everything was perfect, maybe too perfect.

It was time for lunch and it was then when the good vibe changed… As I normally do, I asked them if they had any allergies or food options that I should take in consideration. They both were healthy and they had cero allergies, but they told me that they were following a new trend in eating. They were Colorivores.

What did you say?

I know about omnivores or carnivores, but colorivores! What on earth is that? I had never heard such a thing.

They explained to me that every day of the week has assigned a different color scheme that was ruled by the different stages of the moon.  That meant that on Monday they would only eat white food, on Tuesday orange food, for Wednesday the color assigned was green, and so on. For a second, I thought they were joking, but unfortunately for me, they were not.

OK, I know about Paleo diets, Keto diets. I have even had people who would only eat baby food, but eating by colors? That is in my humble opinion the most stupid diet in the world.

If you have ever encountered somebody whose dietary restrictions were too strange, please share them in the comments.

The best churros in Spain
History of Nativity Scenes in Spain

END_OF_DOCUMENT_TOKEN_TO_BE_REPLACED

Now I can see