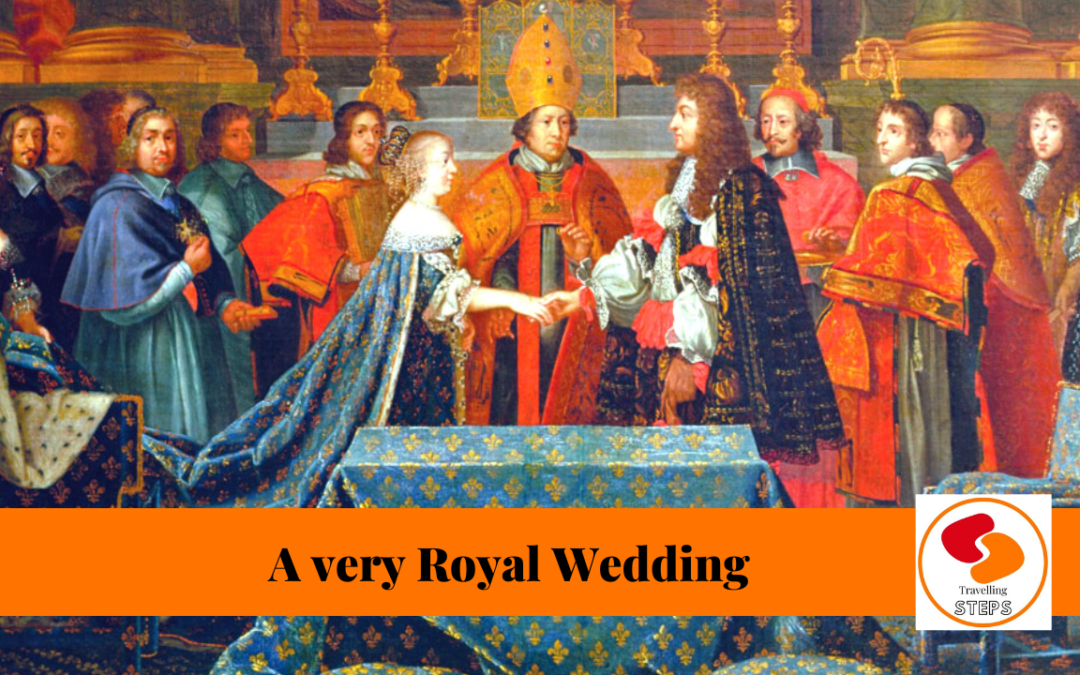 My last two posts have been kind of dense talking about separatism and the uncertain future of the EU. In this new article I want to go lighter, or let’s say fancier…

Let me invite you to a Royal wedding.

If I ask you to think about an over-the-top Royal wedding, it will probably come to your mind 1981´s wedding between his Royal Highness Charles from the house of Windsor and Lady Diana Spencer. That dress, the drama, the setting, it really was something else. Well, in Royal wedding history there was a more intense engagement than this British one.

Join me as I go back to 1660 to be more precise, to June 6th, 1660. This was the day when the two most powerful kingdoms in Europe at that time got married, the kingdom of Spain and the kingdom of France. Two empires who fought against each other for over thirty years to settle their hegemony.

The wedding of the century

This wedding was the result of the Peace Treaty of the Pyrenees, signed on November 7th, 1659, right after the 30-year war. This treaty was signed in a small island located in the middle of the Bidasoa River, the river which divides Spain and France. Many important resolutions came out of the negotiations, being the creation of the definitive borders dividing the countries the most important one. To sign the treaty, the wedding between Louis XIV of France and Princess María Teresa of Spain was arranged.

Yes, you are right thinking about Louis XIV, he is the flamboyant “Sun King”. This arranged marriage had to be the most spectacular one that any royal had ever seen.

Can you imagine the drama just to decide where the wedding should take place? Should it be in Versailles or at the Escorial Palace near Madrid? As they couldn´t arrive to an agreement in these terms, they decided that it should be halfway. The chosen location was Saint Jean de Luz, a small fisherman village located on the south-west French coast, right in the Basque Country.

Although Saint Jean the Luz is French territory, it is actually closer to Madrid than to Paris, this way both egos (sorry, I meant Kingdoms) were satisfied.

Now that they knew where the wedding was going to take place, it was time to prepare the suitcases. We are talking the suitcases of the “SUN KING”. This was not an easy task, and for sure it was not going to be light packing.

Georgina Hill explains in her book “A History of English Costume from the Saxon Period to the Present Day” that wigs were worn by courtiers, bald men, and (for some strange reason) redheads. Our dear Luis, who was bald, had counted 48 hairdressers who designed more than a thousand different wigs in his life which he used daily. I wonder how many he used during his wedding.

What about the bride’s wardrobe. Although we know she wore a deep blue velvet cape embroidered in gold to the wedding ceremony, our Princess’ María Teresa most daring outfit was the one she used to meet her future husband, just three days before the ceremony.

Make a guess, what color did she wear that day? You might think she wore white representing purity, or maybe green for hope. What about pink for love? Well, none of the above, she wore black. Head to toe pitch black. The decision to go dressed in rigorous black was a political decision. What it represented was the economic supremacy of the Spanish empire over the French. The reason is that until 1492 there was not 100% black tints in Europe. Once America was discovered, pure black dye was obtained with the tar that a South American plant creates when it decomposes. What the princess was saying with her black gown was that the Spanish Empire was still the owner of South and Central America, and that was more valuable than any silk suits, feathers, or wigs.

After the ceremony it was time for the entertainment.  A fabulous dinner was served, the menu had over twenty courses. Platters of fresh oysters and scallops, three different soups, turtle pies with rice, ducks´ foie-gras, roasted wild boar, grilled pheasant, strawberries with double cream, apple tart… You name it, it was an amazing banquet. But the pastry chefs saved the best for last, a new and delicate creation. It was an almond based cookie as sweet as the eyes of the bride. Those little tea cakes were called the “Macarons”. I know you know the ones from Ladurée in Paris, but those ones are a modern version of the ones served at this wedding. If you want to try the original ones, you will have to visit the Basque Country, to be more specific you must visit Saint Jean the Luz and taste the Macaroons that are baked daily at Maison Adam.

After the diner an incredible collection of fireworks was lit by the bay. Then it was time for some fancy dancing. The guests danced the night away while wine and other liquors were served. Once they were all exhausted a group of local Basque dancers performed for the elegant city people. Louis XIV felt in love with those vigorous movements, and he invited some of the Basque dancers to join him in Versailles after the wedding, he wanted to incorporate some of those Basque ballet steps into his Royal ballet group. One of those steps today we know it as “pas the Basque”.

As you can see the wedding between Louis XIV of France and María Teresa of Spain was even more flamboyant than the one that took place in London at the end of last century. 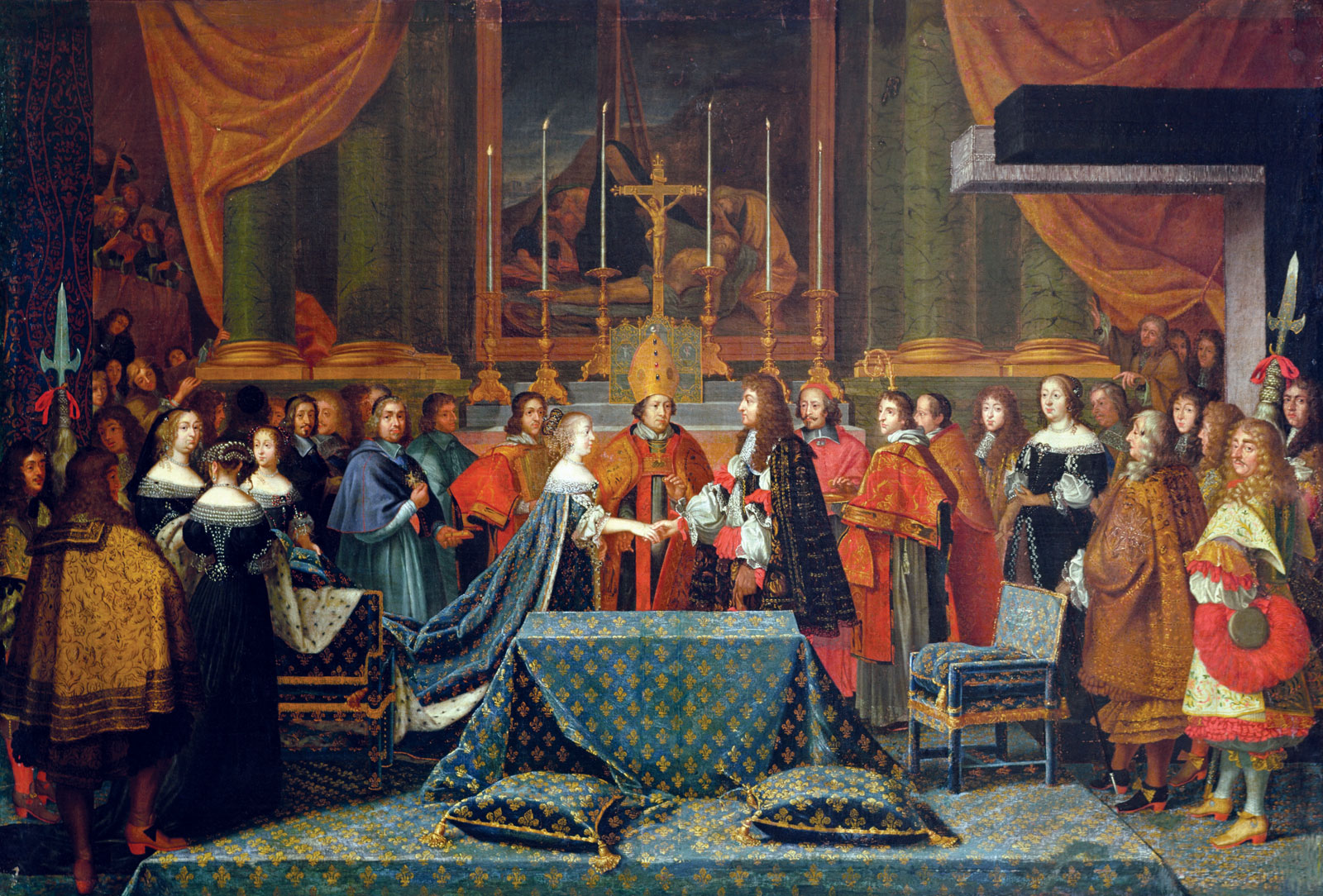 Wedding of Louis XIV of France and Maria Teresa of Spain.

Adios Europe?
To be born in Spain